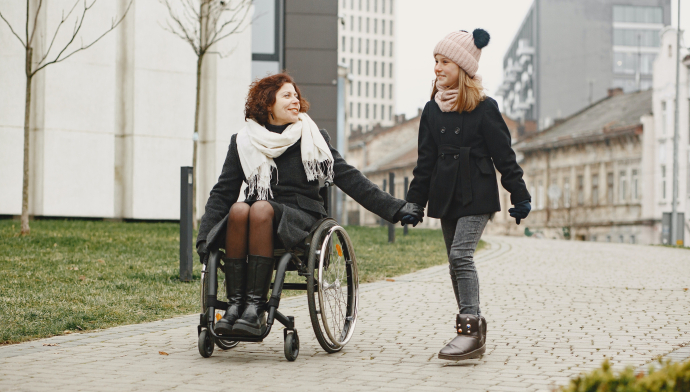 If you ask Woodward what her hopes for Becoming RENTable are, she’ll let you know that she wouldn’t mind being out of business in 10 years. Why? To put it simply, it would mean she and her team of dedicated volunteers had achieved their goal of integrating accessibility into the vacation rental industry. “That’s what we’re trying to do,” says Woodward, “change this industry.”

Woodward, Becoming RENTable’s CEO and founder, was born with muscular dystrophy. “I was raised by a single mom, and she didn’t hold me back on anything. And she encouraged me, when I’d fall, she’d say, ‘OK, you can get up,’” she says. From an early age, Woodward learned that to become strong and independent, she would need to rely on herself, which she credits with helping her as a businesswoman.

Woodward went on to have two children of her own, Nathan, 27, and Alexander, 25, both of whom were born with muscular dystrophy. As a mother, Woodward encourages her children to lead healthy and happy lives but realized they were missing out on creating family memories together through family vacations. A lack of accessibility in places to stay on vacation was a huge obstacle to navigate until, in 2014, Woodward decided to take matters into her own hands. “I said to myself, ‘I want to do this for my boys,’” she says. So three hours away, at Caroline Beach, North Carolina, Woodward built her vacation home.

A ‘Place of No Worries’

Woodward built the property with her family’s needs in mind; the three-story beach house features wide doors for wheelchairs, an elevator, a hospital bed, a roll-in shower, and more. The property, named “A Place of No Worries,” was no small feat to complete. To help cover some of the construction costs, and because Woodward is “not one of those retiring types,” she decided to list it as a short-term rental.

Since its completion, the property has become a popular destination for families seeking an accessible vacation home. Woodward finds renting her property to be rewarding, and she gushes about what it provides for her renters. “I love my renters because I’m a part of the first time that a family has had a vacation in 28 years,” she says. “I get to see a family come together after a member has just spent six months at a rehab facility. And they’re coming to our property first, to see what an accessible property is like before they go back home.

“There’s so much respect and gratitude for this property. I want more people to experience it and be able to have a vacation,” says Woodward, “So how can I get that message out?”

Inspired by her renters, and recognizing a need for more accessibility in the vacation rental space, Woodward created Becoming RENTable. Initially a listing platform to find accessible rentals, Becoming RENTable has become so much more. According to the website, “Becoming rentABLE strives to bring visibility to the need for accessible, short-term rentals for people with mobility, vision, hearing, intellectual and developmental disabilities (IDD) and for individuals on the autism spectrum through education about accessible design, construction, and renovation.”

Today, Becoming RENTable is a fast-growing business, looking to expand its offerings and present new ones. Many new things are in the works, including a TV show pitch, new properties, and an expansion of its educational products and services. Following in its founder’s tracks, Becoming RENTable shows no sign of slowing down. Woodward is here to make waves, and she’s only getting started in the vacation rental industry.

“I don’t do things just because that’s the way they’ve been done or should be done,” she says. Instead, she thinks about what the best approach is, which she accomplishes by “falling down and finding a way to get up.”

Dani Damario is an editor for Arrival magazine.

Tripadvisor, Expedia, Airbnb and Booking.com enjoyed a large enough increase in visitor traffic on both a yearly and monthly basis to bode well for this year, according to the analysis by digital inte...
Expedia Group Announces First Cohort for Startup Accelerator Focused on Underserved Travelers